Rona Munro’s adaptation of Mary Shelley’s iconic horror novel hits Edinburgh’s Kings Theatre. Having seen many iterations on the character, be it animated movies or skit comedy, I was interested to see how this horror giant would hold up on the stage.

The story follows the desperate attempts from a frantic Mary Shelly at writing a genuinely scary story involving her “nightmare”, the characters she creates along the way and the dire situations she finds herself putting them in. Thus, creating a harrowing tale about desperation, love, loss and the horror within.

Eilidh Loan portrays Mary Shelley with unhindered energy. She really carries this production with her fantastic presence and quick whips which really do catch you off guard, bringing levity to the terror we are witnessing around her. She navigates her way round our characters, fitting right in as a woman with a story to tell, and boy does she tell it. Her character’s desperation and confusion through the process of her writing is so believable throughout. She exudes such a confidence and ease that I had to double take when I read this was her professional stage debut. She did the best with what she was given, the character being written a little disjointedly; coming in and out of the action making it a bit confusing what world she exists in. 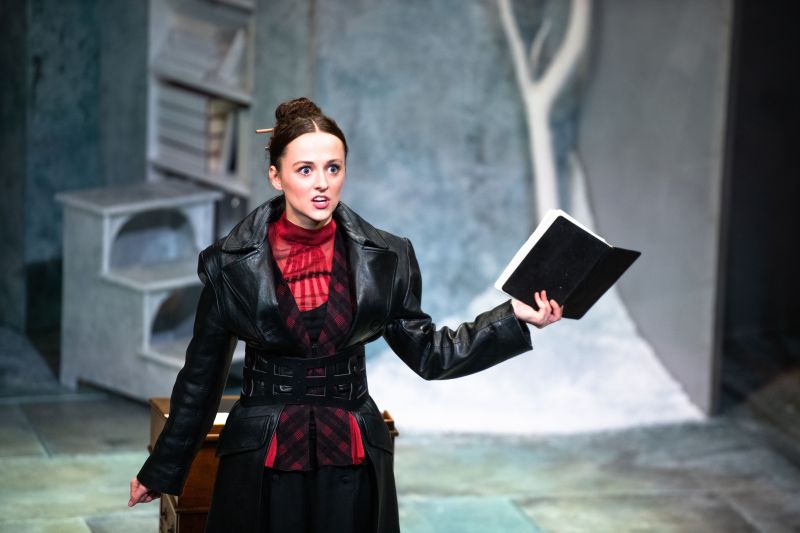 Ben Castle-Gibb portrays our scientist, Victor Frankenstein. He is likeable yet so vulnerable, we feel pity for Frankenstein at almost every turn and yet still root for him to go further. Ben caresses the stage with such remarkable presence and ability to depict such a range of emotions from despair, to sheer terror, determination to insanity, his voice so clearly heard, even at the back of the circle, that one would not guess this was also his professional stage debut. Another stand-out performance from a young actor within this cast.

Michael Moreland as Frankenstein’s Monster is something to behold on stage. He holds your attention with every scene he is in. We feel empathy for this misunderstood outcast, even after his dreadful deeds. However, at times his performance felt a little one-note as he would sometimes resort to just shouting whenever portraying anger and this could have done with some variety to make his journey more interesting. Thierry Mabonga is excellent as Victor’s best friend Henry. His gentle yet obvious love and affection for Frankenstein is palpable and very nice to see on stage. His brief portrayal of Victor’s younger brother, William is a blink-and-you’ll-miss-it role but is done to adequacy for the small stage time he had.

Natali McCleary’s portrayal of Elizabeth, Victor’s doting love interest, falls a little flat. This is mainly down to the source material as her character was basically there as a reason for Frankenstein to come home from work. However, her willingness to keep loving him even after all his flaws is admirable and is communicated well by McCleary. Greg Powrie is very comfortable in his role as the stern, yet caring father and Sarah MacGillivray really pulls on your heart strings as the unfairly treated maid of our titular family.

Munro’s play is fast-paced, and it doesn’t stop for a break. Patricia Benecke does well in the first act to capture this breakneck speed as the scenes flow seamlessly into each other, but at times can feel a little too fast and doesn’t allow time for beats and pauses to really sink in. Her real miss comes at the end. The message Munro is going for is clear, but the execution is a little sloppy, feeling almost rushed at the end with an abrupt, anti-climactic ending. The lighting atmosphere and changes are adapted excellently by Grant Anderson, managing to keep up with the persistent pace of the piece. His attention to detail was impressive, with pale whites used for frosty ice-cold scenes and wide beams cascading across the stage through the impressive architecture of the set really added an eerie tone to the action. Becky Minto’s set is nice and has a minimalist and creepy feel to it all, however it could have done with more gothic undertones due to the dark subject matter and felt a little restricting by the end of the play. That being, however, the set wasn’t used to its full extent, with certain lighting and silhouetted moments happening repeatedly in the one place. Having these spread out would have felt like a more effective use of space.

“Above all else, I hope this play terrifies you. That’s its Job” says Rona Munro at the start of the programme. As a play about seeing the monster in one’s self, and some main themes being desperation and pursuing something tirelessly, ‘Frankenstein’ has a poignant message for the world today; making us look at our own failings and attempts to grasp the unattainable. Being “terrifying”, however, may have been something this production is left reaching for.

‘Frankenstein’ is currently playing at Capital theatre’s Edinburgh King’s Theatre. Get tickets at: